I recently wrote a new UI plugin in oVirt, that allows creating a VM that will run a Docker container inside it. This post shares the information about it, explains how to use it and what are the prerequisites.

What is it good for?

Well, Docker gives a very cool wrapping on top of linux containers. In addition, it also gives a public repository people can use! That makes it very easy to both create and consume container images that give different services, such as application servers, databases and many other services. Using the UI plugin to run that inside oVirt makes the job of deploying an existent service as easy as clicking a button (well... some steps are required first, but not too much steps :-) ).

In order to use the UI plugin you first need to fetch it from the samples-uiplugins git repository. The git repository is in git://gerrit.ovirt.org/samples-uiplugins. The plugin is currently being reviewed, so it is available at Docker-Plugin-Patch. Copy the plugin files to /usr/share/ovirt-engine/ui-plugins, so that you'll have the following directory structure:

Then, you need to configure it. I usually do that using the docker.json file, although you can create a user-specific file as well. The relevant entries to configure are:


How does it work?

The plugin is based on creating a new oVirt VM from a template, passing cloud-init arguments that will configure and run the docker container.
Thus, in order to use it you need to have a Fedora image with docker service (with -r option to make containers start also after VM), cloud-init, and ovirt-guest-agent

It works only in cluster level 3.4 and above, as it requires persisting the cloud-init properties

Make sure the template you create have enough storage, as it might be required when downloading docker images. If you're interested in specific images then I recommend to pull them to the VM you create the template from, that way they'll be available, and won't require downloading the image when starting the container.

1. You first login to the oVirt admin portal, and go the the VM main tab: 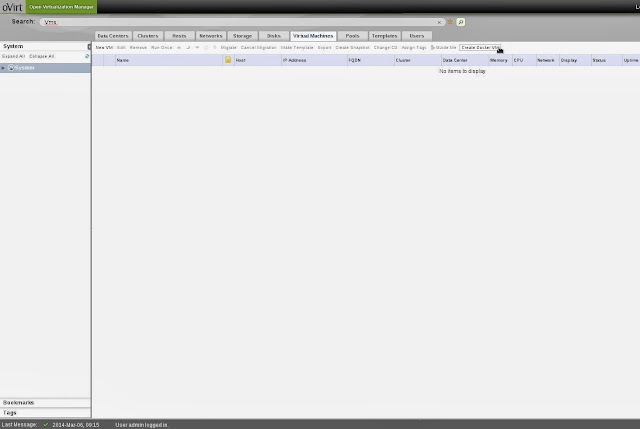 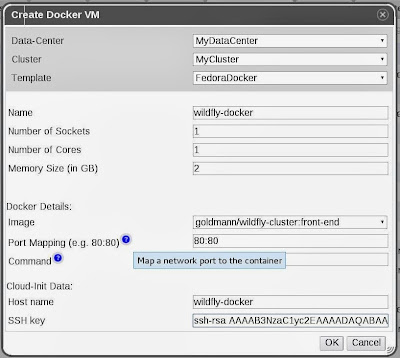 
The VM is being created now. Once finished you can run it. After a few minutes, the IP address of it will appear in the admin portal, so you can either connect to it via SSH if you want (using the public SSH key you've passed), or just use the service it is supplying. In the screenshot I've created a Jboss instance, so I can just see that browsing results in a Test Page. Here is a screenshot showing the IP address: 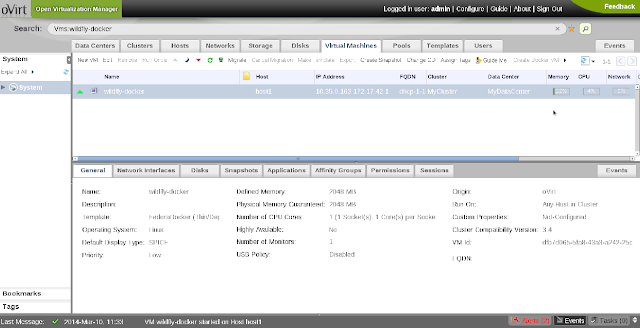 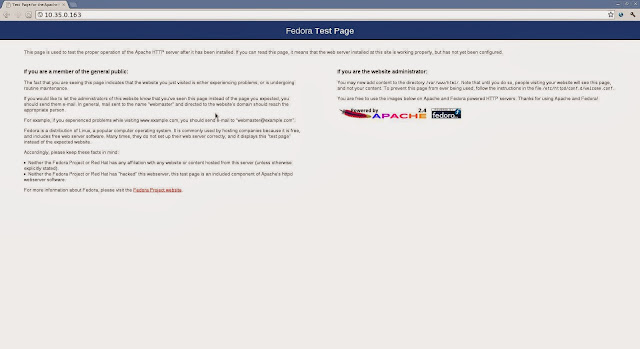 In order to ease the process of using this UI plugin, I've created an image you can import from the public oVirt Glance repository, "CentOS 6.5 64-Bit Docker".
You can import it using the guide available in my previous post (Importing Glance images as oVirt templates). It is based on the CentOS 6.5 cloud image. Make sure to create a virtual NIC in the template after importing, and also to set the relevant OS.

Note that I tested the plugin both using this template, and using a Fedora 19 template, installed from scratch. Using the Fedora 19 cloud image didn't work well for me, as the docker container got stuck on startup.

That's it! Start running containers in oVirt!
Posted by Unknown at 7:59 AM